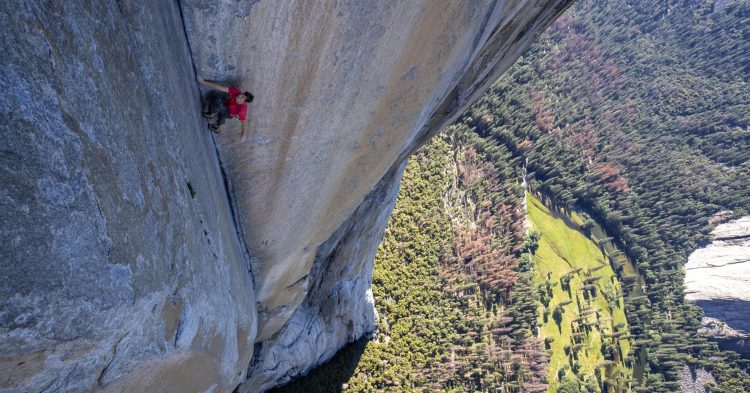 I finally had a chance this past week to watch the 2018 Oscar-winning documentary Free Solo; part biographical character piece of climber Alex Honnold, part white-knuckle fly-on-the-three-thousand-foot-wall chronicle of his succesful attempt to be the first person to summit El Capitan in Yosemite National Park – without ropes!

The film is, unsurprisingly given the plaudits rained down upon it, a masterpiece. Gripping story, complex characters, astounding cinematography and stakes so real you’ll find yourself having to remember to breathe on multiple occasions. However, far much more than simply a climbing movie, Free Solo becomes an intimate and poinantly breathtaking case study in how to prepare for and execute a perfect performance. Failure in our more ground-level pursuits may not threaten death, but it may certainly forever change our trajectories. Sometimes, even when the stakes are somewhat lower, there are no second chances.

The brutally honest way Alex Honnold lives his live and exudes his unwaivering philosophy is truly inspiring, and I felt there were a number of lessons to be extracted from the film, and its subject.

Learn to master your emotions.

Although Honnold has quite chosen a discipline somewhat rarified in it’s extremity, his thought process in approaching the climb reveals a mechanism available to all of us. A capability to master our emotions, to a certain degree, when faced with challenge and fear.

Whether it be speaking in public, taking up a new hobby, or performing live on your instrument, so often we create excuses and talk ourselves out of things that scare us. Honnold has clearly made it his mission in life to expose himself to fear, to an extreme degree, in order to be able to apply certain coping mechanisms in situations where his life is literally on the line. This mentality, is something that can then be applied to other walks of life and challenges big and small.

This is a similar idea to the the 10,000-hour rule (as espoused by Malcolm Gladwell); the theory being that through training in, or exposure to, something for long enough — 10,000 hours as a somewhat arbitrary barometer — you can attain mastery over it.

Our stakes may appear smaller, but they are still very real to us, and our comfort zones just as debilitating. Think what we might each accomplish, if we truly set our minds to it and turned towards the challenge, instead of recoiling from it.

Honnold had already climbed El Cap approximately 50 times in the decade before filming began, using ropes, practicing; noting every stage of the route, every curve and crack in the rock, every grip, every move and exactly where, how, and when to take it. His achievement seems extreme and somewhat of an overnight sensation to us – the viewer – but was in fact the culmination of hundreds of hours spent on that specific piece of granite, let alone the thousands of hours of cumulative experience he was able to draw on.

In both our practise and performances we can all adopt this same meticulous approach to preparation so that; when things go wrong we’ve already addressed their possibility in our minds and can react appropriately. Even when things go swimmingly, this preparation allows us to simply flow with the movements we’ve made thousands of times – a form of unconscious competence.

Tied into preparation is the sense of trying to control a particular outcome. Obviously in the case of free soloing this is particularly important given the outcome is the somewhat binary possibility of either life or death, yet this is an important lesson and approach for us to learn too.

There will always be aspects we can control and risks we cannot, in anything we do. Part of our success in any endeavour is a direct result of our ability to identify and acknowledge the risks, assess and minimise them, and make an informed decision as to how best to execute action to achieve our desired result.

This is true in life, yet also specifically in our practise. Whether preparing for an audition, live performance, exam, recording session or even successful practise session. There are things we can control, things we can mitigate, and things we must learn to let go off entirely. Having no choice in the matter, everyone sometimes has to work without a metaphorical rope.

By the time it came to make the unsupported ascent Honnold had basically memorized the route, and his each and every move, so methodically and completely as to “remove all doubt”.

So often in our approach to our instruments, seeking improvement, I feel we confuse practising with playing. Playing through songs we know, even if they are the very songs we wish to improve and develop, is not the same as methodically unpacking which specific areas of a given piece we are struggling with and working on them in isolation, repeatedly, before piecing them back together in the context of the overall composition.

So often students will bemoan their inability to play a particular part of a piece quickly enough or without error. However, they never address the problem in isolation. Only by slowing down their every move in order to observe it, and map them out accordingly can they achieve a level of automation and confidence to ensure no possibility of error.

The obstacle is the way.

Just as water rises to it’s own level we must each set ourselves the heights to which we can then ascend.

On a much smaller scale this can even be true of our day to day practise. We can derive a great deal of pleasure from playing what we already know and do well, and there is certainly a place for this within our lives and careers as musicians. Yet growth can only truly be achieved through friction. In rising to meet the challenges we set for ourselves, and those others set for us, we galvanise our current abilities and develop new skills, as well as resiliency under pressure.

There are no shortcuts to mastery.

Whilst it no doubt plays a part, luck cannot be relied on in the pursuit of any goal. So often we use luck as a thinly veiled excuse for not wanting to put in more effort. If our big break doesn’t come it’s because we never got lucky, not because we were inadequately prepared.

It’s not about doing enough and waiting to be rewarded, it’s about an obsessive work ethic towards the thing you want to improve. That may not be the hobby of playing an instrument for you, but it is a valuable lesson in commitment to what you find most meaningful in your life.

There are no shortcuts. We have a right to the work, but not necessarily to the fruits of the work. An appreciation for, and devotion to, your craft will undoubtably yield results but the work has to be worth it in and of itself. The journey is the destination.

As Honnold sums up on reflection of his achievements, “If there were an easy way to do it, then everyone would do it. Some things just require time and work and effort.”

I hope you’ve enjoyed this latest post and feel inspired to both check out Free Solo, and take on board some of it’s lessons. I’d love to hear your thoughts and take on the movie in the comments below and, if you’ve enjoyed this article, please take a look at our other blog posts. If you’re looking for guitar lessons in Leeds then please get in touch.